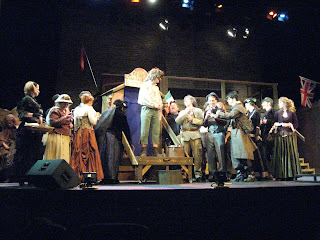 Last night's Dress went pretty well... well, we missed a few things, but now we won't... that's the point of dress- to scare you crapless for the night and emblazon it in your mind so you don't screw it up again.

Here's a quick link to our first article!

yup, this confirms it.
I'm the LAMEST person I know.
Tonight was one of those lovely nights, pulling me out of a funk that's taken over the past few days. Brisk air, sun shining down, dinner with dear friends, and a concert.
Not just any concert.
The lovely Martyn Joseph was in town.
I love this guy's music. It's from just the right spot.
here... have a video. (ok two).
So, I've had the privilege of seeing him in concert several times. The first time was out at the gallery- in the middle of '08's worst snowstorm. This summer he played at the festival- and I ran into him around the campfire a few times- he played my Uke (and put me to shame).
so of course, what's the first thing I say to him when I see him at the show tonight? (let's preface this with- I've just been greeted with "oh! hello beauty") (that would be Martyn's version of knowing he knows me from somewhere) (I'll take it)
yes, of course, I embarrass myself by saying "so, did you pick up a ukulele for yourself when you got home?"
and then... further it later with....
Singing harmonies as loud as I can- like I'm lost in church... and then he wanders out into the audience with his guitar and sits down beside me... I forget the words and stop singing.
yup.
ok.
awesome.
I think I'll go to sleep now.
brain to page L.Bo Marie at 11:18 pm 2 comments:

Labels: Church, concerts, harmonyitis, I should be a hermit, Lawless

back in the day

I've just spent the past few days pouring over old emails and pictures from Togo.

I keep watching this over and over....

and maybe I'm not watching, maybe I'm sitting with my eyes closed, even though it's very pretty.

walk a mile in those shoes.


I just took off my shoes... eeeewwwwwww.
Which made me think...

When I worked with Watoto, we had mornings that started around 6am, by the time we climbed into bed at night and took off our shoes 18 hours later... it was painfully stinky in our room (not just from me!) One of my girls took to calling me "stink wooman" (say it with a Ugandan child's accent)