I wonder sometimes....
how I can go nearly a year without anything...
then, in a matter of a week, get 3 requests from couch surfers... all to arrive on the same week. (Anyone want to meet a new friend?)
brain to page L.Bo Marie at 11:17 pm 1 comment:

Tonight I'm headed North to spend some time with lovely people, listening to some lovely music. And I've been listening to the CDs so I can play the part of a good audience member, and hum along in the catchy parts, and smile big when I hear the opening notes of a favourite tune.

Yesterday I got sent this fantastic little email from a man who's part of NUkeO (our Uke Jam group) He'd been trying to figure out the chords the night before for "Skinamarink", and he'd found them, and sent them my way... then at the bottom of the page, a huge picture of the two of us, grinning like fools at the Uke Jam. The email made me smile so big, my coworker took one look at me and said... "that's your Ukulele smile, I can always tell". 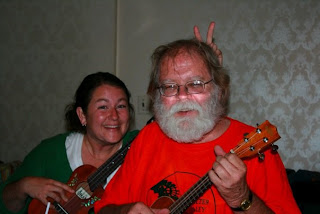 this picture makes me laugh too much. One, because Jim asked if he bunny ears behind his head... before the picture was taken. And two, because my fingers look so long. It's because the Uke is so tiny... but when I first saw the pic, I immediately thought of my sister, who has these long graceful fingers- I've always been jealous of them... it's like when you hold those tiny tiny cans of pop they serve on some airlines... they make you feel like a giant.


Today a friend of mine is meeting some members of his birth family... I'm really excited (and nervous) for him. I can't imagine... really can't even begin to imagine, the pile and mix of emotions all of them must be feeling right now... praying for them today.
brain to page L.Bo Marie at 8:11 am 1 comment:

Labels: community, folks, hobbits in my pockets, I'm in a band, Monday Bunday, Uke could too

My heart is happy.
Happier than it's been in a long time. I feel... mostly centred.. except where I take on the things that the people I love are dealing with. But I'm even learning to be centred there.
I should note:: my pad of paper has been snaffu'ed by festival comings and goings. an endless "to do" list. So, maybe I'm back to typing. Unless I can find myself a new lovely pad.
This weekend, the lovely Catherine (and her PEI all stars) came to town. An impromptu concert, held in the Sheff's backyard. And it couldn't have been done better. It was a little piece of heaven. Perfect weather, great mix of talent, green soft grass, a few new hobbits, SVFF style pot luck (for those who've never had the opportunity to try eating with a bunch of true foodies, here's a direct quote from my room mate- a long sufferer of the church pot lucks and crock pots.... " I have NEVER eaten food like that at a pot luck! I couldn't believe it! Who made all that?").
The perfect collection of moments.
brain to page L.Bo Marie at 12:55 am 1 comment:

I'd like to thank Kevin for this fantastic site.

and an update, another 2 morning glories lost, another set of Zucchini seeds, and one cauliflower munched.

yesterday a lovely friend suggested that I plant garlic to deter the buggers. Did I mention the lost of 6 cloves of garlic earlier this spring?
brain to page L.Bo Marie at 1:13 pm 2 comments:

I've had some squirrel issues in the past.
big ones.
1  and    2  and   3
seems those "issues" have followed me to this house too. Perhaps it's the same squirrel all grown up? How long do squirrels live? This is nearly 4 years to the week since that first squirrel encounter.... Now, if you're reading this as a note on facebook- and not in my blog, you've probably been following the updates about the squirrels to date, and you're probably thinking this is redundant... get over it. I need something to complain about.
I've decided that since the landlord isn't selling the house out from under us, that I'd like to take a little time to work in the garden... and more specifically, grow some food for the bunnies and I.  I've managed (with a lot of help from the garden hobbit party*) to get the garden in working order- enough so that I've been able to move a bunch of the perennials out of the central bed- and have started a few veggies... combine that with the planters, and I've got a mini kitchen garden. (nearly a mini farm**)
last week the trouble started.
the squirrels dug up my lettuce. and chomped and dug up my cantaloupe plants. then just dug a bunch of holes in the beets and spinach. thanks.
yesterday, and twice today.... all of my beans have been eaten (they'd just been put in the ground)(I know, a little late, but the temps have been sooo cold) my zucchini seeds got eaten. the new cantaloupe plants were ripped out of their soil. chomped on the hubburd squash seedlings. The little broccoli plants had been tunnelled under... the fancy "fractal" broccoli seeds were dug up (uneaten) and the morning glories ripped out of the soil.
the only things they didn't touch (yet) were the winter squash, cauliflower, two types of carrots, and the pea plants.
I hate squirrels.
* garden hobbit party:: a lovely group of people travelling from garden to garden, sharing the work load and some good food. I love my hobbits.
**there are mini cows to be had. I'm doomed.
no really.. just picture it... mini cows, babydoll sheep, pygmy goats... and giant bunnies.
brain to page L.Bo Marie at 8:40 am 3 comments:

ok. best part of my day by far.
I have to submit some advertising for a car wash we're hosting as a fund raiser for the "AKTION" Club. The "AKTION" club is a service group thru work that I help to run- hosted in part by the local Kiwanis Club...

So, I like to use the interwebs.. and tried to submit my little blurb via the online version of our community newspaper. ("community newspaper" to be a topic for another day)
I clicked on the tab... and was brought to an error page.

and I just sat and giggled.

An error occured while processing the request.

giggled at the spelling and grammar... and wished I worked for a newspaper too.
brain to page L.Bo Marie at 10:28 am 3 comments:

it's a common syndrome in a particular population of people... not they themselves are particular...
not that I'm particular.

there's a group of people that are more apt to be afflicted with UAS than the general population.
there.

I've got it.
Several people I know have it.

There's even a support group dedicated to it.
Ukulele Acquisition Syndrome.

I MAY have bought my 3rd Ukulele.

-side note:: quote of the week from a few weeks ago "Ukuleles are too trendy" ~MegSheff
brain to page L.Bo Marie at 11:09 am 4 comments:

L.Bo Marie
living in my space as lightly as I can.