This.
Sitting on the couch.
Not worrying.

Imagine that. 10 festivals. 9 years I've been involved. 8 years of stomach wrenching, teeth grinding... sometimes vomit inducing- stress. And now, 1 year of going to a festival and not having a care in the world. I cried the night before my first festival. I was so tired. I'd given so much of me. And then I went on to have a magical weekend. I was hooked.

So now my only worry.
Going into something without an emotional investment... will it mean that I am more-or will I be less emotionally open to the experience? Do I need to be raw to accept the gifts that community brings?

I hope not.
I'm going to try to be present in every moment.

It's been awhile since a day off with no commitments whatsoever.

... at the end of it I turned to the dog and tried to make him promise me that if I died alone in this house, he'd have the decency to not eat my face off.
He didn't answer.

Labels: I should be a hermit, Rueben

I remember the date that I was first allowed to use a pen in class to write with. September 6th 1985... It was a friday. It was a big deal. I think I've written here before about how it was my "default date" for a long time... the date I'd write at the top of the page if I wasn't paying attention to what I was doing.

Big kids got to use pens.
Big kids in grade three.
Pencils were for babies

Labels: back to the future, I should be a hermit

My dog is an American

a little follow up, now that I've got a working keyboard! Don't worry, this isn't going to become a dog blog... seriously, I've had him for 3 months and I'm only just getting around to writing about him.

So the poor boy was living on the streets... in Ohio. Weird right? My dog is an American. He was picked up by a kill shelter and spent the next week or two there- the shelter said his time was up there and thankfully Collie Rescue stepped in. They brought him up into Ontario where he was only in his foster home a week before my application was accepted... he moved in with me a little less than a month later.

I think the thing that is the strangest is how good he is... like really- other than the puppy antics and the crazy barking (I've won the fight against the bark 2 days in a row now!) He's so well behaved. He learns quickly. He wants to please me. He's had one accident (when he was sick) in the house- and even then he did everything he could to NOT have an accident in the house. He LOVES little people... and is mostly gentle with them- yesterday he wanted to run over a small child with excitement, but he sat, then flopped over on his back for a belly rub. He doesn't offer his belly to adults when he meets them... but little kids... he's in LOVE with little people.... he lets them do weird little kid things to him... like tie stuffed animals to his head- and then he prances around following them, licking them.... with stuffed animals still tied to his head.

Labels: I want a dog, Rueben

Sometimes I just need to shake my head at myself!

So I've been living in frustration with the broken keyboard (remind3er, th6is2 is2 wh6a1t h6a1pens2 wh6en I us2e it). It's kept me from spending much time online. No, that's a lie, it's kept me a lurker. The act of even responding with one line would make me want to poke my eyes out... deleting all those extra numbers.

Sure, I posted a few blog posts, I wrote a few emails where I had to... but for the most part stayed "silent" online.

Today I was deleting numbers- trying to write a two sentence response to someone about how to build a fruit fly trap like the one I was using (dear.GOD. I have a lot of fruit flies in the house right now)... when a thought came to me.

I marched into my bedroom, reached down into the dark corner of my closet, and closed my fingers around something thin and metal.

Guess who forgot that she had purchased a spare mac keyboard 3 or 4 years ago while at the bluebox? um.
yeah...
I (now) remember the exact conversation I had with a friend when I bought it "I'm buying the keyboard in case I ever spill a beer or something on my computer... it's good to have a back up plan".
(it's good to review your back up plans every once in awhile)

all that glitters is not fully gold though, the return button doesn't work- but the one on the number pad of the keyboard does...

I am stupidly happy right now.
brain to page L.Bo Marie at 9:46 pm No comments:

I fully intended to write a post about my new pooch back months ago when I got him... but then we started walking together and it seemed every free second was given to him. 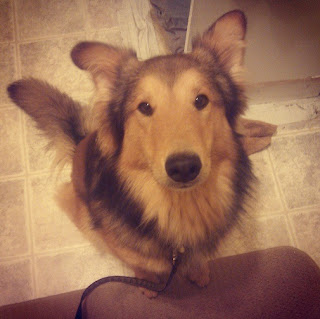 (with this face, wouldn't you give every second?)

2 pairs of shoes and nearly 3 pant sizes later, we've settled into a routine that works for the 2 of us. One that still leaves me some down time for reading and writing...  And netfix. 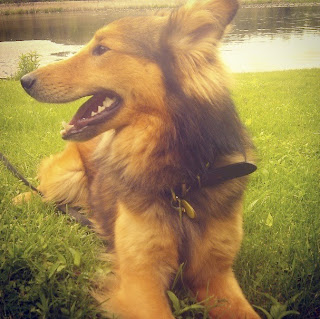 He's a sweet boy, and I shouldn't complain about his shelter dog quirks- we're working through them. He loves everyone and works really hard to be a good boy. 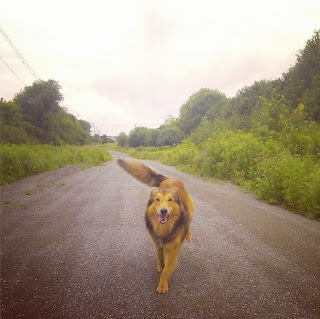 Rueben Onwry With Mustard- because every dog needs a distinguished name

I'd been so lonely since I had to put down Jelly, I started looking on petfinder.com to see if I found anything that looked appealing... Two friends posted his link to me on facebook... and I fell in love.
And that's that! He's here to stay.
brain to page L.Bo Marie at 2:35 pm No comments:

Labels: I want a dog, Rueben

it's the feet... and the claw thingies

I'm standing in my bathtub having a shower.. and trying desperately not to cry.

When it's summer, I treat my hair like it's curly, when it's winter I treat it like it's straight. What does that mean?  Winter is filled with combing and brushing and washing my hair nearly daily- zero humidity calls for it. But in the glorious summer? ah yes, my hair goes free. I only brush it when I wash it, if I wash it. curls like to be free.

Today was a hair washing day.

I dunked my hair under the spray of the water and the smell of a campfire from 2 nights ago was recharged and released ... I love that. I grabbed the brush and fought the good fight (and won). I threw the dead cat's worth of hair that I'd combed out into the trash... and looked down... and that's when I saw it circling the drain...

there had been a freakin' dead earwig in my HAIR.
oh.
dear.
God.
Save.
Me.

So. I'm standing in my bathtub having a shower... and trying desperately not to cry.

So, Rueben and I have taken his training with the bike cart a step further... he had so much fun running beside the cart in training that he's now running for 5/10 mins a day beside the bike. I want to make this as safe as possible, so I need to rig something up that can attach to the rack on the back of the bike and hold the leash out a foot from the side of the bike. I'm sure I can ask a welding friend.

He's tied in a quick release knot to the rack at the back now -to keep him out of the path of the bike and because he can't throw the bike off when he decides it's time to bark at another dog. We travel at "fast trot" speed and the second he has to break into a lope we slow down- because of where he's tied, he runs right beside my right knee so I can see him without the danger of him getting under the wheels. So far so good. We go on the quietest streets after the evening walkers are laying on their couches with their dogs.... and he's SO so happy!
My feet are so happy too.

I'm going to have to learn how to weld... I have visions of a collie cart bike hybrid!
brain to page L.Bo Marie at 12:15 am No comments:

A few months ago I caved.
"A gift to myself" I said.

I hired a cleaning lady.

Seriously? In your tiny house? It seems like such a waste of money!
No, no it's not.

See, I've mentioned before- I'm an "outty" organizer, raised by a family of "inny" organizers. Things need to be tidy in their place out of sight so I don't suffer from guilt. My deceased mother's voice "don't you care about the things you own?" rings in my ears when I look at my cluttered dresser... my father's actual voice "your mother would have had a fit if she saw your counter" as he walks through my kitchen.

I feel bad when things are a mess. But, I don't know where stuff is if it's out of sight.

Enter the cleaning lady. (A coworker who has a passion for cleaning). My house makes me giggle when I walk in the door... it's that clean.

But I have a dirty (messy) secret. My bedroom has been an embarrassing mess/disaster for months. To the point that I told the cleaning lady that I didn't want her to do my room.... So I've kept my door closed when anyone enters the house... I pile things in the corners... on top of the dresser. Clothing lays in a pile beside the bed. Not quite to the point of looking like a hoarder's home... but close.

When I go out of town I get a twinge of "I'd better not die in a car accident or end up in hospital- someone will see my room".

This week the cleaning lady came... and decided to clean my room. I had a few moments of  panic "what will she think of me"... but mostly it's been relief.

At least now if I die, it won't be from embarrassment.
brain to page L.Bo Marie at 6:58 am No comments: