In the past couple of months, two of my neighbours have built new garages.
Not the "attached to the house" kind, like in subdivisions, but the grand "coach house" style that they park their cars in front of and store random crap in.

Because, they still need us to be able to see what their cars look like.


I love my neighbourhood.
It's this quirky combination of giant century mansions tucked into corner lots, with tiny century homes (those built for the servants and children of the "big houses") scattered between tiny war time houses and a hodge-podge of 70's mid-sized homes.  THIS. This weird jumble is why I love downtown small towns.

Some of those giant homes have been turned into multiple family dwelling units (read: ghetto apartments), while some are B&Bs, every other is a single family home...

I realized today that both of those new garages are significantly larger than my home.

And I'm SO ok with that. 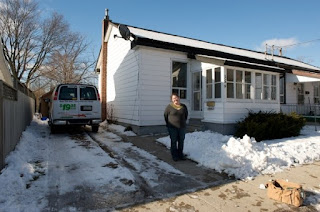