Last night was just perfect!
A huge thanks to Kaye and Neil for opening their home to a gaggle of people they didn't even know... Actually, there were people at this show that I didn't know either. I love that the series has grown like that- true enough, most of the people I didn't know had come because it was Kerri playing, but I'm sure I'll see some of them again.

Another great thing about last night was the number of people new to house concerts! About one third of our 35 people had never been to a house concert before... that's pretty cool.

There were some glitches with the live streaming- the set up of the space made it kind of awkward to check the feed. I think I'll have to put someone in charge of that for me during a show. It's a little much hosting/organizing and doing techie type things, in the past I've wished there was some moderator on the chat too...

Kerri was adorable as always, but with this really sweet almost overwhelmed-with-gratitude thing... She made the audience feel like we were doing her this huge favour by being there- her face each time we sang along with the well known pieces, her reaction when we broke into harmonies with her new music was so touching...I nearly cried watching the joy in her face... meanwhile- it was we who were so thankful she could be there! Having good music come to a small space means so much to our little community.

Paul's songs were fabulous- what a welcome surprise. I loved his low mellow voice, and the tricky way his songs made me bob my head along happily to songs of heartbreak... haha, so funny when I think about it now. Having the two of them sing together was a real treat. Kerri's voice has this AMAZING resonance to it- near pitch perfect (if not dead on!)- so her tones have this cool way of rolling back into themselves... um... that might not make as much sense written down as it does in my head... anyway, her voice would stand alone so clearly and Paul's voice would sort of melt into the notes... it was really neat pairing...  like like like. 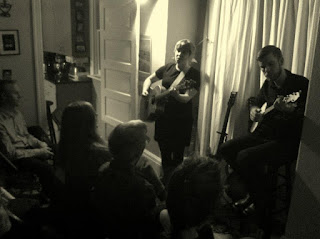